I have been staying in KL for more than 10 years and my colleague al..." /> The Finest Of Chinese Foods by Restoran Extra Super Tanker, Damansara Kim - Food Point of Interest
KL 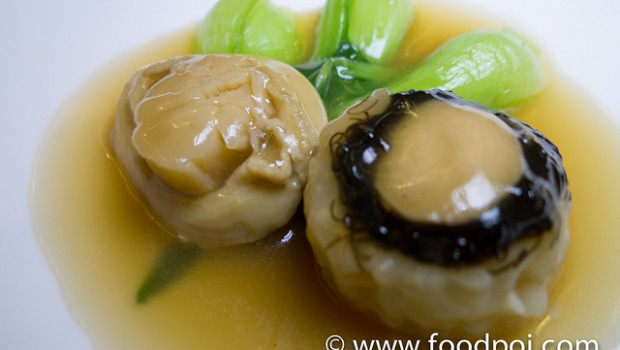 I have been staying in KL for more than 10 years and my colleague always said there are a lot of tai chow place in KL. But out of all that it is pretty normal and do not impress me much. Maybe most of their foods were pretty similar and not much of creativity. Some more they ain’t cheap which usually come out to pay more than what it is worth. Inspired by the now defunct Penang KOMTAR Super Tanker, Chef Chin or better known as Wah Kor helm the kitchen of Restoran Extra Super Tanker. There are actually 2 outlets belongs to him. The first and longest is the one located at Damansara Kim opposite Taman Tun Dr Ismail. Another one is at Bukit Utama. Throughout 9 years, they started off with 1 shop lot and not expand till 4th. I was introduce to them 2 weeks back on the newly launched menu items. This is made the traditional style like my mom’s cooking. It is hand cut and then mixed with special home made sauce. The combination of 4 Chinese favorite sun dried seafoods are used in preparing this soup. It is double boiled for a long period of time with old chickens. By the milky color of the soup, it is very dense in taste but still taste good. This dish is an old school dish but present in a different way. Instead of serving the abalone as a whole, the center part of the abalone is replaced by dried scallops. Then the abalone head are placed in a braised gourd ring garnished with black moss (Fatt Choi). This is the abalone head after removing it from the gourd ring. Usually the abalone are kinda springy and AH Wah Kor being an expert in braise cuisines, soften it with his skill. The fish are fillet and sliced thinly. Then it is slowly bath in oil to cook it slowly. According to the chef, this way it will retain the fish juiciness and sweet taste. This dish gets all the attention through out the night. The pork ribs were braised in superior rice wine and then steamed in the pumpkin. The whole pumpkin are edible from the skins and the flesh within. This taste pretty close to bak kut teh but who cares …. as long as it is good the rest doesn’t matter. The pork melts in your mouth without need to munch much. Presented on a bed of caramelised sliced onion, the fungi’s soft, spongy caps came wrapped up in thin slices of pork shoulder meat. The sturdier stems were stir-fried and crusted with salted egg yolk. Origin from Bukit Tinggi, this vegetable are stir-fried with thin pork neck meat in a fiery-hot sauce that tempered the leaves’ grassiness and the pork’s fatty accent. This is a healthy version of fried rice prepared by Wah Kor. He emphasise his customer should eat healthy and enjoy his cookings. For dessert, we were served with sharks fin soup. Every single scoop are filled with fresh peeled crab meats and the fins are of high quality. Checkout the quality of the fins below. This is a rare occasion that during a review, I booked a table on the spot for my next visit. The food is REALLY THAT GOOD!  Vincent Lam (one of the eatery’s co-owners) recommends us the restaurant’s signature dishes for our next feasting trip there. Most of the foods that we plan to have MUST BE ordered 2 days in advance. The foods below are not simply available for walk in customers. A reservation MUST be made prior your arrival. The traditional starter or called 4 seasons platter were commonly served during wedding banquets. The chickens were poached and then freeze together with its juice. Normally suckling pig is all about the skins. Wah Kor version is something worth mention. He pair it with shrimp paste. Home made tofu with ham and other specialties. A MUST order here where this dish sold out pretty fast daily. You can only have this dish during weekends. At first I am expecting the tendon to be quite hard and bouncy. Upon putting it in mouth, the melt away sensation are awesome. The meats too were so soft till by just putting your fork over it, the meat will fall from its bone. I personally rate this is MALAYSIA #1 fried rice. Usually people don’t give much attention to fried rice as it is just a filler at the banquet finale. Just incase the guest not full enough this is just a cover. I wouldn’t say that here at Extra Super Tanker. This is a fried rice which needs to order 2 days in advance!  This is due to the prawn ball were hand made where a large amount of shrimps were hand cut to retain its succulent. The rice were then fried and cooked for 45 minutes non stop in a very small heat to ensure it doesn’t burned. Several crab claws, large prawns, dried scallops and roast pork meats were used in the fried rice. Such a luxurious plate of fried rice are fits fot a king! We were surprised that the rice were served together with iceberg lettuce. According to Wah Kor this is meant to wrap the rice and eat it. This is emperor Hsien Long fried rice! A MUST ORDER!!!

Prior to this post alone, I have been there for the 3rd time after the review. I just can’t get enough of its food since there are still a wide range of foods yet to be ventured. I would say you shall order the foods towards the claypot braised type and also fried rice as this is the specialty at this outlet. If you choose for a healthier choice of food, then you shall check out their THE CLUB Bukit Utama outlet which operates under the same name.

I will be back for more in December 2012 for another round of feasting. I will be attending with a bunch of fellow food writers for this and shall order traditional long forgotten dishes.