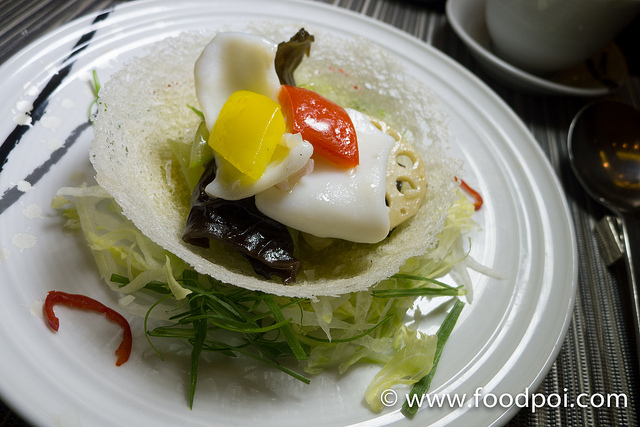 Hainanese Food ….. What do the word remind you of? Chicken Rice? I got the opportunity to taste the real deal at the award winning Chinese restaurant Lai Po Heen, Mandarin Oriental. They fly in Chef Leung Po Lam from Mandarin Oriental, Sanya for a showcase of sophisticated Hainan flavours. Appetizer – Peanuts on Balsamic Vinegar. Something new here but still retains the traditional peanuts as an appetizer. The signature Sanya Chili Sauce where it is a unique taste to go along with any dishes. It has a strong bean with ginger paste taste paired with spicy herbs. This is not for the faint hearted. Having worked at some of the best restaurants in HK and Guangzhou, Chef Leung has almost 30 years of culinary experience. He joined Langham Hotel in Hong Kong in 2006 in which his efforts in its Cantonese restaurant helped earn a Michelin star rating. Prior to joining Mandarin Oriental, Sanya in Nov 2011, Chef Leung was attached with Four Seasons Macau where he managed the culinary aspect of their 100 table restaurant. During his tenure, the restaurant was awarded with two Michelin star. This is how a live abalone looks like. It was air flown in all the way from Sanya as they are renowned for fresh and top grade seafoods. Each guest were served in the a Chinese tea set . The soup were doubled boiled for 5 hours with the abalone and old chickens which famous for its rich taste for boiling soups. The baby abalone, fish maw are tender and the dried cordyceps soup were tasty. Steamed baby abalone and king scallop with glass noodles and black bean sauce. The scallop are big and juicy which the sauce made the glass noodle really delicious. The abalone steamed to perfection which having the perfect chewiness. This chicken is imported from a place in China called Tanniu. It was a free range chicken that roam around the place and survive by feeding on grass. But compared to our Kampung Chicken, the meat were much tender and juicy. The dip sauce were made from young ginger and garlics mix. Then spring onions were added upon served. Lotus lake sautéed vegetables with sliced cuttlefish was beautifully presented and lightly flavoured. I liked the tenderness of the squid was just nice. Fried rice with salmon and scallop

This is something new to me where salmon are used in fried rice. I was told that the rice were just fried with a pinch of salt together with the rice, scallops and salmon. According to Chef Lam, this is the best way to bring out the taste of the seafoods. Creamy almond tea with egg white and deep fried coconut milk spheres. Chef Lam said the food were crafed for beauty benefits. There’s a surprise waiting for you inside the sphere.